The following estimates are from three sources on the same day (January 13, 2019).  Actual pay varies greatly by location.  Read the job descriptions.

From January 2019 through March 15, 2019 we will be posting up to 21 salary reviews of varying job titles in sales and marketing.

You can see the most recent postings and last year's reviews here.   Salary Reviews

We start this report with some information from the US Department of Labor and then visit commercial sites with more updated information and end with the PSRA’s Job Center.  Links are included.

Public relations and fundraising managers plan campaigns to raise donations or improve the public image of their clients.

Management Tip: PR Seldom gets the Credit it Deserves

PR can be one of your most consistent performers in the promotional stack!

There are many forms of Public Relations: crises management, press releases,  press mentions, community relations, articles, speaking, and media tours, but PR seldom gets credit for its contributions to sales.   For the average company, PR can contribute as much as 22-23% of  all the sales leads it creates.   (You have to measure all forms of marketing).

I am continually surprised at how often companies think public relations is thought of as just a press release when a new product is announced.  A press program says to the market that your company is alive, progressive, moving forward, and aware.  It can't be the money for PR, it is usually pocket change compared to the return.  It must be ignorance.

When I visit a web site and see few if any press releases, the most recent a year or so old, and no press contact, it tells me a lot about the company and none of it is good.

Got a management tip you've learned the hard way, send it to jim@theslma.com

I think PR is hugely underrated as a source for traffic, leads, and branding. In this SLMA Radio program, now a podcast, one of our most popular shows by listener count, Elizabeth Fairleigh gives the listener a recipe to drive sales.

RANT: Are you really visiting, or is that just your feed I see? 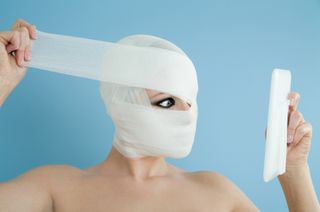 As tools and feeds become more sophisticated, time becomes more fleeting, social media demands become daunting, the temptation to put your networking on auto-pilot is too tempting for a larger percentage of professionals and companies.

In the past, you would receive an email, view a post, and it was almost like shaking hands with that person, or at least being in the same room with them.  As I make the tour around my various LinkedIn groups and Twitter news feed (I don't have time for much more than those two venues), I notice the bulk are automated posts linking to that person's "stuff" or content. There is no engagement, no conversation, no collaboration. "BUY MY STUFF!" "LOOK AT ME, LOOK AT ME!" LinkedIn groups have become a joke filled with avatars pushing transparent content and pitches, as well as automated posts that turn groups into another RSS reader. I spend more time moderating and deleting than reading true content.

Where are the real converstations happening? Some of us value video conferencing, teleconferncing, personal emails and in person lunches. I am bombarded with piles of automated crap every day. Not one person realizes I received it, until they check the stats from their marketing automation program and monthly reports. That is becoming the extent of their networking, growth, and relationship nurturing.

Remember when MTV had MUSIC and videos? This is seeming quite familiar. Useless waste of bandwidth, time and resources.

A wish for LinkedIn:

All automated pushes from feeds, aggregators and the like BLOCKED from all groups. Put what you want on your own profile. Google+, Twitter, Facebook - same thing. If what you have to say is really of value and you sincerely want to open a conversation rather than just shooting buckshot into the universe - or more like a good dose of AquaNet for all of us to choke and gag on - Take the time to actually WRITE IT YOURSELF - TYPE IT, tailor it for the venue, audience or group. Invite the conversation. Try it without linking to your stuff once in a while. You may be shocked at the results.

How do you feel about this topic? Are you experiencing the same clutter in all of your feeds of the same things from the same people, knowing full well they don't even visit these venues 1/10 of the time the spent automatically pushing their crap down our throats. 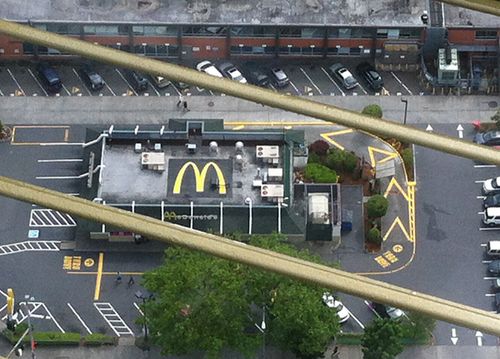 (photo above is McD viewed from the Seattle Space Needle: don't miss an opportunity to keep your brand front and center!)

Before bloggers even begin posting the first two mistakes in this list happen before the template has been chosen:

1. Permitting someone else to register the domain for you under that person's account.  This results in your NOT being the owner of your domain. There are four contacts in the domain registration.  When another company registers it your domain under their own account, you will not be listed as the owner, the billing or administrative contact.  The problem with this is that if you have a falling out with that person or company, or they close shop, you'll never get notification of when your domain is about to expire and you risk that your site will go down, including your mail.  In worse cases, your domain could be forward to another address without your knowledge or taken offline altogether maliciously if you have any conflicts.  You may also lose your domain and it can be very difficult to get it back.

SOLUTION: If you have someone else register it for you, be sure to request that they update the contacts to show you as the registrant, administrative and billing contacts. The agency can remain the technical contact.  That's a MUST.  Better yet, set up your own account with a domain registrant such as namecheap.com, godaddy.com, or hostgator.com  I'm not a fan of Register.com or NetworkSolutions.com – too difficult to make changes and talk to a human.  DOMAIN registration is NOT NAME server or WEB HOSTING.  They can all be at the same place, but you can also have your domain registered with one company, the site sits with another company and your name servers are somewhere else. (YouTube 5 minute video: learn the difference.)

Perhaps you've noticed this icon at the top of our site, perhaps not. Perhaps you did and wondered why would the SLMA bother with Pinterest. For several of our sponsors, they understand the importance of sharing images and having them indexed immediately in the search engines. Pinterest is a highly-effective microblog, as Twitter is a mircroblog. The difference is that people are visual by nature. Pinterest is all about sharing an image that grabs the attention of your existing or potential audience and driving them to want to learn more.

We have just started, so we don't have many followers, nor do we have many pins.  We want to build our following both ways. If you have a Pinterest account related to Sales Lead Management and all of its branches, and would like us to follow you, please comment with your link at the end of this post.

Continue reading "SLMA Diving Into Pinterest Because it Works" »

1 – Do remember that actions speak louder than words.  After the most recent Herman Cain and Penn State crisis communications news, need we say more?

2 – Do get into how mobile messaging can work in your business, if you aren’t already there.  It’s where technology will continue to move.

3 – Do maintain at least a semi-annual face-to-face with your top customers, even if you’re on email with them every day.

4 – Do use the search features of Twitter to find new, targeted prospects for your products and services…but don’t spam them.  Follow and get to know them, then look for the right opportunity to start a relevant conversation.

5 – Do join at least 1-3 targeted industry forums on Linked In.  It’s the top social network for B2B.