The Best of Justin Gray on the SLMA Radio Plus Podcast 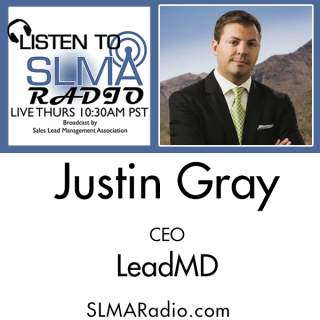 Learn from Justin Gray.  Justin Gray is a serial entrepreneur who has launched four multi-million- dollar companies, become a recognized speaker and has been published over 350 times throughout his career.  He has also been a frequent guest on the weekly SLMA Radio/Podcast (515 episodes, in ten years).  You can access all of his programs here or individually below.    The Best of Justin Gray on SLMA Radio

Recipe for Growth: How LeadMD Grew 133% Year Over Year

Program host, Jim Obermayer, read a recent press release from LeadMD and what caught his eye was the 133% growth figure for their year over year sales so far in 2019.   “Why” is the question Obermayer asked the company.  The answer prompted the interview for this program with Justin Gray the CEO of LeadMD.  His response is both interesting and predictable for a company that counts several thousand companies as its clients.

Serial entrepreneurs seem to learn more than most of us in business. Maybe it’s quickness of the lessons learned, the successes and the failures and mistakes that come in fast succession. Justin Gray of LeadMD is a serial entrepreneur and our guest to discuss what he means by sweating the small stuff (not what you think), partners, why success in business shouldn’t get easier, where fun enters into the equation and an interesting take on people.

Why Only 13% of Marketing Automation Programs are Successful

It's one thing to buy a marketing automation tool and install it. It’s quite another thing to use it every day to manage and nurture, your most precious asset: sales leads. And yet some would say that this leading-edge technology could be aptly named bleeding edge because of the effort it extracts from the users to make it work. In the interview with Justin Gray, CEO of LeadMD we discuss how to avoid being part of the 87% of marketing automation users who fail.

Marketing Automation has promise, no doubt about it, but how do you turn promise into measurable wins that can be shown to management and sales? In this week’s SLMA Radio program, Justin Gray, CEO of LeadMD gives us a roadmap to get quick wins in 30 days for new marketing automation installations. The host for this program is Jim Obermayer.

Justin Gray is the CEO & Chief Marketing Evangelist of LeadMD. He founded the company in 2009 with the vision of transforming traditional “grassroots” marketing efforts through the use of cloud based marketing solutions. Realizing the potential for growth in this space, Mr. Gray created a true Marketing-as-a-Service corporation, which specializes in outsourcing the core functions of a marketing department either through on-demand solutions, consulting or both.

Justin is the CEO and founder of LeadMD, a role he’s held for the past ten years. He also co-founded PaidSuite, a SaaS payment technology provider, and led the company through a successful acquisition in 2017. He is the co-founder of Greyson Organics, an organic farm in rural Missouri he co-owns and operates with his father, as well. Justin and his wife, Jennifer, met over marketing in 2013, welcomed their first child, Grayson, in 2018 and are expecting a daughter in November 2019.

Over 30,000 Marketing and Sales professionals receive best practices from LeadMD right to their inbox.