The Poem "In Flanders Fields" by Lieutenant-Colonel John McCrae: No Have Not Learned "In Flanders Fields" is a war poem in the form of a rondeau, written during the First World War by Canadian physician Lieutenant-Colonel John McCrae.  Source Wikipedia

In Flanders fields the poppies blow
Between the crosses, row on row,
That mark our place; and in the sky
The larks, still bravely singing, fly
Scarce heard amid the guns below.

We are the Dead. Short days ago
We lived, felt dawn, saw sunset glow,
Loved and were loved, and now we lie
In Flanders fields.

Take up our quarrel with the foe:
To you from failing hands we throw
The torch; be yours to hold it high.
If ye break faith with us who die
We shall not sleep, though poppies grow
In Flanders fields.

Alexis Helmer, a close friend, was killed during the battle on May 2. McCrae performed the burial service himself, at which time he noted how poppies quickly grew around the graves of those who died at Ypres. The next day, he composed the poem while sitting in the back of an ambulance at an Advanced Dressing Station outside Ypres.[8] This location is today known as the John McCrae Memorial Site. 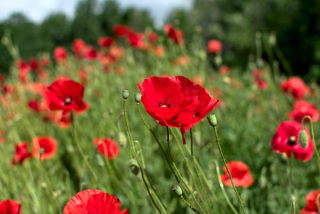 Following the trench warfare in the poppy fields of Flanders, Belgium during World War I, poppies have become a symbol of remembrance of soldiers who have died during wartime.  McCrea, a Canadian, never made it home.

And on a personal note, my salute to the men of the 63 RD Infantry Platoon, Combat Trackers for the Americal Division, 1969, Viet Nam, we made it home. For my O.C.S. class of  1967, many were not so lucky; Lieutenants were more expendable. We did our duty, as best we saw and that's all that matters.