Home The SLMA Join the SLMA 20 Women to Watch SLMA Radio Sponsors 40 Most Inspiring Privacy
What does That Marketing Job Pay?
Hemingway said, "Never mistake motion for action" But Then Again he Didn't Have a CRM or Marketing Automation System

Does marketing control the wealth of the B2B companies?  Darryl Praill, CMO of VanillaSoft and host of the popular Inside Inside Sales podcast says, “it depends.”

In the end, he says marketers are the builders of wealth, pound for pound, when measured against the employee count of marketing versus that of sales. They have the talent and the skills, Darryl says, but whether they have the will to use these is another matter 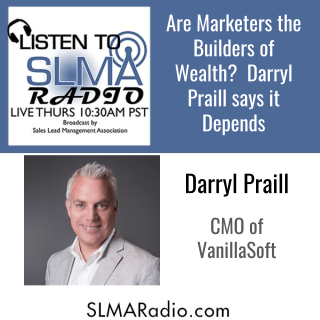 This statement can also be said of other departments, says Darryl, but marketing sets the strategic direction of the company, produces the product specifications that customers need, and generates demand.   Darryl, however, still puts a “but” into the interview when he cautions that not every marketer is using their talents and skills as well as their competitors.

Darryl Praill, Chief Marketing Officer of VanillaSoft is a high-tech marketing executive with over 25 years’ experience spanning startups, re-starts, consolidations, acquisitions, divestments and IPO’s. He has been widely quoted in the media including television, press, and trade publications. He is a guest lecturer, public speaker, and radio personality and has been featured in numerous podcasts, case studies, and best-selling books.

More with Darryl Praill on Inside Inside Sales

Steps to Handle and Reduce Objections