Home The SLMA Join the SLMA 20 Women to Watch SLMA Radio Sponsors 40 Most Inspiring Privacy
The Simplest, Easiest Skill, 95% of Salespeople Don’t Know from Andrea Waltz
Why You Should Consider Marketing on Quora - AJ Wilcox Talks to JD Prater

What Salespeople Obtain too Cheaply, They May Esteem too Lightly! Leads for instance?

Thomas Pain said, "What we obtain too cheap, we esteem too lightly, 'tis dearness only that gives everything its value.”  Until salespeople realize the time, effort and company treasure that goes into lead generation, they seldom value the gifts they are given.  They don't have to work or for the sales leads so they take what’s given very lightly.

Maybe the lack of sales lead follow-up by salespeople (75-90%) has to do with their disrespect for the time, effort and cost to find the inquirer.  They get leads too easily and don’t value them.  They simply don't know how much it cost to find qualified prospects.  Plus, most don't know that nearly half of the inquirers they get will turn into a sale for someone.

Some salespeople don’t understand how easy they have it until the marketing budget is slashed and they have to prospects on their own.

Give a salesperson five inquiries a month and they follow them up; give them 50 and they have a different opinion.  Suddenly they do not have the time; most leads they say, are not worth their effort.  I have found that more than 25 inquiries a month for inside salespeople, and more than 10-15 a month for outside salespeople without a qualification or nurture process spells wasted marketing dollars.

Maybe, just maybe, this attitude of ignoring sales leads from marketing is rooted in the independent nature of the people hired for sales. After all, only the most confident and risk-prone people are willing to take a job that risks 25%-75% of their income on their own abilities to perform. One would think they would be grateful for any help they get, but that doesn’t appear to be the case.  The arrogance of the risk takers in sales is only matched by the self-confidence of our entrepreneurial class.

This means that 75-90% of the lead generation dollars are wasted.  It’s a pity more marketers aren't better at proving the ROI for their programs.   Why Don't Salespeople Follow-up?  It's still a mystery few have solved.  Maybe Thomas Paine was right!     “What we obtain too cheap, we esteem too lightly.”

Which is why marketing automation was invented and is such an important addition to the sales tool kit. 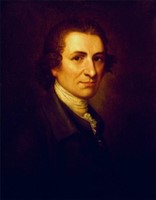 “What we obtain too cheap, we esteem too lightly: it is dearness only that gives everything its value. Heaven knows how to put a proper price upon its good, and it would be strange indeed if so celestial an article as freedom should not be highly rated.”