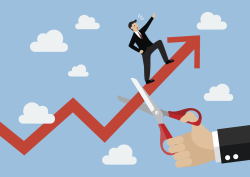 t was early September, late in the afternoon on a Friday as I remember, when the company president called me into his office.  It was a medical device company, which had gone public in the previous year.  Sales were going well, so far.

He started off quickly and got to the point.

“I need a favor,” he said.  “We have to cut the budget substantially in this upcoming last quarter; I need $400,000 from Marketing.  Please get back to me on Monday and let me know where you can cut.”

This was a 40-person direct sales force driven by leads.  The marketplace was private physicians, numbering about 200,000.   We needed to pump 1% of those into the pipeline each month.  Yes, we had a CRM system, and yes, we knew the closing ratios. We had a well-oiled machine for lead generation.  We projected how many qualified leads we needed and there was an inside tele-sales department of eight people who fueled the system with qualified leads, including a time-frame to buy.

I took a moment to respond.  “Of course, I’ll deliver what you need, but some of the budget is committed to trade shows and a large percentage of the dollars are essentially spent.   Some projects are in process and we’ll see what we can save if we cancel them.  Others projects are just starting.  I’ll get back to you on Monday. Oh, by the way, if we take dollars from lead generation plans, profits will drop further as sales decrease.  It’s complicated.  You may want to take the money from elsewhere.”

Entrepreneurs don’t like being reminded that maybe their first impulse isn’t always the best, but it was worth the risk.

It was a restless weekend for me; not so much for him as he had already penciled in the $400,000 needed for the last quarter financials.  I was prepared with a document showing the savings, but there were a few extra lines on the spreadsheet he wasn’t expecting.

At 9 am on Monday, I showed up as scheduled and presented a one-page report.

I started off directing him to the first line item:  direct mail.

“We can cancel,” I said, “the 100,000-unit direct mail project we have scheduled for mid-September.  We’ve spent some money on creative which will not be wasted, but the printing and mailing fees can be saved, which will be about $95,000 for the self-mailer.”

Of course, because we’ll have fewer leads coming in, the salespeople will try to make their quotas and may recover some of the sales; probably not all, but some which further reduces profit.  The added damage comes in the following three quarters, unless we increase spending after the first of the year to make up what we’ve lost in potential.

Do you want to make this cut?”

“Hmmm, I guess not,” he said.  With a frown, he knew what was coming next.

And thus it went for a few more items, which were minor in terms of business lost.

“I know,” I said, “you want the profit to look better for the investors but at the same time we cannot guarantee the top line; it will drop.  The two are connected.

“I didn’t envy the position the president was in, but he had to be reminded of the consequences of cutting the marketing budget: the marketing lead-generation budget is a string attached to sales results.  Tug on the marketing budget string and it will have a short- and long-term effect on sales…all downward.”

He paused, looking at me.  “Yes, I know they’re connected,” he said with a sigh. “Leave the report. I’ll get back to you tomorrow.

He did get back to me, via email, and his only comment was: “Leave the lead generation program alone.  I need $75K from you; I don’t care where it comes from.  I will try to get the rest from other departments.”

I didn’t envy the position he was in, but he had to be reminded of the consequences: the marketing lead-generation budget is a string attached to sales results.  Tug on the marketing budget string and it will have a short- and a long-term effect on sales… all downward.

That was it.   He found the money elsewhere.  We never spoke about it again.

More if you are in the same situation:

This calculator determines the sales dollar results from a lead generation campaign.

This calculator determines the number of sales leads (inquiries) needed to obtain a forecasted sales quota.

[i] The marketing and sales figures are approximate as best I can recollect; it’s been a few years since this happened.  Regardless, the lesson learned of this true story has stayed with me.