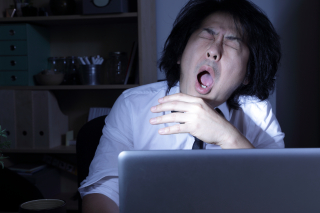 As someone said to me recently, “Webinars? They’re so 90s - - poorly produced talking heads and PowerPoint slides we can’t read are tiring.”  ”  As  creative child of the internet, B2B Webinars seem to be running out of steam as a tactic. Users say they’re losing value.  The only more passé term in the promotional world is “Free Webinar.

Certainly, webinars attempt to teach, but its more common to see pitching and preaching using talking heads and PowerPoint slides are sure to lull viewers to sleep.  Often, at the very least, listless content drives them to answer email and browse the web while the webinar drones on, no longer viewed by 10-25% of the audience.

Webinars are slipping, maybe because the format is 20 years old!

From the webinar presenter’s standpoint, however, the event is the culmination of a lot of work:  recruitment of speakers, 2-3 rehearsals, countless slide versions, pre-webinar promotions, breathless counting of registrations, and disappointment when 60% of registrants are no-shows, abandon rates are disappointing and attendees are answering email.

From the webinar presenter’s standpoint, however, the event is the culmination of a lot of work:  recruitment of speakers, 2-3 rehearsals, countless slide versions, pre-webinar promotions, breathless counting of registrations, and disappointment when 60% of registrants are no-shows.  Of the 40% left, 5-10% leave early and 5-10% aren’t attentive.   And when you examine registrant information, you find many are from your own company or competitors’.

The promotional cost in labor (inside and at agencies), purchased lists, a company’s own database, the 2-3 email blasts and telemarketing calls to registrants the day before, oft times add up to meager results.  Even companies producing webinars have shifted away from touting their lead- generating potential to talking about webinars as teaching events.  Although one of the standout premier companies for all types of webinar production is ON24, with 85,000 webinars produced in 2016 for 1,000 customers (not just business-to-business companies).

Ideally, when you ask those who pay webinar production bills, they admit to the expense, the difficulty in getting speakers to rehearsals and to creating PowerPoint slides and slipping attendee numbers.  Many CMOs want an alternative but they scratch their heads and do it over again.  What's that saying, insanity is doing the same thing over and over again but expecting different results.

There is a Better Way 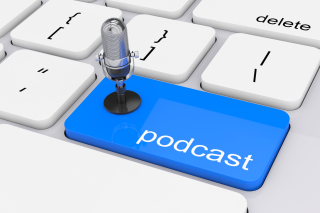 Certainly, YouTube use continues to grow, and video production is becoming commonplace in many companies.   Of course, there is the video studio expense (or agency) and editing that must now take place, whereas live webinars were at essentially a one-and-done medium. Many guests like to be guests, but don’t like “dressing up” for the video experience; I know it’s an odd excuse, but it’s true.

And yet, the form of stealth communication continuing to grow and mature is podcasting.[i]  It started in the 1980s with audioblogging and is now said to be produced by 115,000 English-language podcasters at virtually no cost.  Podcasting started getting serious attention and audiences in 2004 in part because of its ease of production and low cost. The authenticity of the episodic podcaster has helped - - many podcasters follow a talk-radio format familiar to us all.  Wikipedia reports that, “According to one survey in 2017, 42 million Americans above the age of twelve listen to podcasts at least on a weekly basis.”

While growing in popularity for at-work and at-home listeners, podcasting has also grown in sophistication.  Software has helped, and websites that store and provide access to podcasts are common and cheap.  Agencies and publishers specializing in podcasting have sprung up, and yet podcast creation has not gotten more complicated or costly.  Sound quality is excellent and editing is easy.

The result is podcasting has listeners who want answers and learning.  They want knowledge with a minimum of effort.  They want information access on their own terms, most often through subscriptions, at a place and time they choose, at no cost.  They don’t want to be sold.

Podcasting turns out to be the answer for the demands of a growing generation of impatient information seekers.  Because of the growing need for multi-use content, podcasting has matured.  It provides this multi-use content in dozens of formats.  See this article outlining 16 Ways a Podcast Creates Useable Content

Why Podcasting is so Popular

“Podcasting turns out to be the answer for the demands of a growing generation of impatient information seekers.  Because of the growing need for multi-use content, podcasting has matured.  It provides multi-use digital content in dozens of formats.”

This medium, however, requires something YouTube and webinars don’t: frequency.  Podcasts by their very nature require a personality and voice people can trust, and once listeners realize this they want to hear more from this person. A good example is Matt Heinz of Heinz Marketing with his Sales Funnel Radio/podcast program.  Matt has done this weekly program for several years (he started bi-weekly) and has developed a large B2B following and listenership.

On the Funnel Radio Channel, we have a list of the “Real Personalities of Funnel Radio.”  It’s a growing list of leaders and authors who’ve chosen radio/podcasting to give back to their industry.  To date, Funnel Radio has produced nearly 1,000 podcasts for dozens of leaders who built their thought-leadership reputation in part as hosts of a weekly, bi-weekly or monthly program.  Certainly, many are authors and speakers who had a loyal following before their podcasts began.

Podcast programming builds the host’s personal reputation, but corporate benefits and content creation are paramount.  Along with this is the introduction of the host to people, prospects, companies and industries not normally open to him or her.

Hey, as a friend John-Shawn Withrow once said to me, "Don't forget Jim, it’s all about entertainment"

I can’t explain the psychic reasons behind it, but listeners who hear a program, with the host’s name and company attached, seem to give both an outsized level of credibility.  Certainly, speaking at conferences is similar, but this has a different level of trustworthiness.

Maybe it’s the connection to “radio” and “live broadcasting” on a regularly- scheduled show.  Maybe it’s an assumption on the part of listeners and guests that the host already has answers to their questions, and therefore he or she has a conferred level of thought leadership.

Why are Podcast Hosts Elevated in the Listeners Mind?

“I can’t explain the psychic reasons behind it, but listeners who hear a program, with the host’s name and company attached, seem to give both an out sized level of credibility.  Certainly, speaking at conferences is similar, but this has a different level of trustworthiness.”

Regardless, if the host chooses good guests, stays with the program’s efforts consistently, and uses program content in other venues, thought leadership seems to be the result.  We have seen relatively unknown people become very well-known and stand out from the crowd.

Podcasts don’t produce themselves and some effort must be made to build an audience.  Let’s address the questions about frequency, getting guests, editing, promoting the show, listenership, listener reach and ROI. 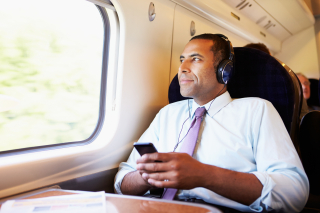 Listening to podcasts from subscriptions is easy on iTunes, Stitcher, Podbean, B2B Podcast Directory any place, any time including trains planes and automobiles; exercising, walking the dog, hiding in the garage from in-laws...[/caption]

Some media reach targets at work, while some do a better job of reaching people at home, traveling, exercising, etc.   Podcasting is, we believe, the best media to reach people via audio, on demand, regardless of what the listener is doing.  Whether the listener opts in as a podcast follower, subscribes or accesses a podcast via iTunes, B2B Podcast Directory, Blubrry, or other audio service, he or she just wants to listen when they want to listen, with the fewest constraints on where it happens.

The interesting thing about podcasting is, those who intentionally use it for creating a variety of content, find they have a treasure trove seldom found elsewhere in marketing.  A 3,500-word podcast of 25+ minutes can give the host and sponsoring company content to use in books, e-books, blogs, white papers, case studies, testimonials, speeches, nurture content, social media, YouTube, collateral, etc.   For more on the ROI capabilities of podcasting check out:  How to Measure Podcast Contributions to Revenue.

Podcasts are usually offered as ‘episodes” in a string of daily (not likely in B2B), weekly, bi-weekly, or monthly programs.  The more shows a podcaster produces, the faster the podcasting personality picks up listeners. Yet many leaders don’t have time to do weekly shows.  This is often solved by having multiple show hosts.  See Sales Enablement Radio as an example, or SLMA Radio.  One host can take one week and another the next.  The thought leadership will build just as quickly.

Some hosts on the Funnel Radio Channel have determined that monthly show hosting is good, simply because so much multi-use content is created in a single show that it takes time to use it all.  Larger companies can use the content from several shows a month.

No longer are most podcasts 30-minute diatribes on what’s wrong with the world, with few if any solutions. These days they are serious, interesting shows that interview authors, leaders, speakers, CEOs and CMOs.  We find it easy to get a guest to appear on a podcast.  The Funnel Radio Channel prides itself in having live shows at a specific time each week, which helps to recruit guests; few people turn down the invitation for a podcast interview.

“No longer are most podcasts 30-minute diatribes on what’s wrong with the world, with few if any solutions. These days they are serious, interesting shows that interview authors, leaders, speakers, CEOs and CMOs.“

Unlike webinars, if your podcast is live, prepromotion of the event is useful but not needed.  The payoff for podcasts is the listenership after the program has been broadcast and posted, as well as the many ways to use the content.  See my guest post on Dan McDade’s Blog, Viewpoint: Why Podcasting Has Great Reach and is the Least Expensive Content Creator.   Again, unlike webinars, podcasts don’t depend on live attendance.  Much more like radio of recent years, podcasts depend on listeners after the event (if it is live).

I don’t propose eliminating webinars from your arsenal but give them their proper place as senior members of your promotional outreach.   Additionally, consider podcasts for their reach to the at-work and away-from-work listener.  Podcasting is a medium that’s come into its own as the most far-reaching, multi-use generator of content and traffic at a minuscule cost, compared to other lead-generating tactics.

[i] From Wikipedia: The word was originally suggested by Ben Hammersley as a portmanteau of "iPod" (a brand of media player) and "broadcast".[2][3]

How to Measure Podcast Contributions to Revenue