How Henry Schuck at DiscoverORG got to 24K Demos 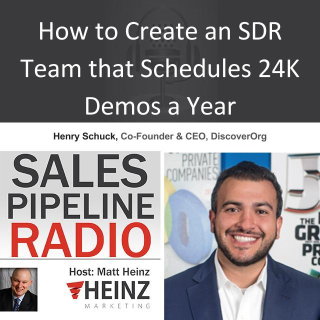 Sitting in for Matt Heinz (jury duty called), Jim Obermayer interviews DiscoverORG CEO Henry Schuck to discuss how his company fed their revenue climb with a journey to 24k demos a year for the SDR team:

o   Personal attention, mentorship and encouragement are all key to keeping the team on track

o   Encourages the rest of the team to stay accountable, hold one another accountable

Your may also like:  How MI Improves Marketing ROI

Henry Schuck is a leading entrepreneur in sales intelligence and lead generation. Having founded DiscoverOrg in 2007 when he was 23, he has led the company on a rapid growth path including funding investments from the likes of TA Associates, Goldman Sachs BDC, FiveW Capital and NXT Capital.

Under Henry’s leadership, DiscoverOrg built the industry’s most accurate, highest-quality contact database, through a mix of technology and a team of live researchers who continually call into thousands of IT, marketing, HR, and finance departments. DiscoverOrg was recognized for the quality of its datasets with both a Stevie® and a CODIE award. It was also named a Leader and ranked Number One in customer service by G2 Crowd.

Before founding DiscoverOrg, Henry managed marketing and research at iProfile leading the company to a successful private equity sale.