Why is there a New Demand Waterfall?

Unless you were abducted by aliens, you’ve seen the tweets, LinkedIn posts, and other coverage by the media, thought leaders, and demand generation experts about the new Demand Unit Waterfall introduced by Sirius Decisions at their annual conference in Las Vegas on May 16 – 19th 2017. 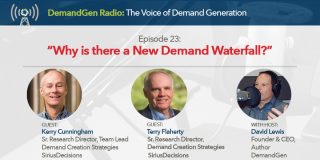 The initial feedback to the unveiling has been mixed with both excitement and skepticism. David invites Terry Flaherty and Kerry Cunningham, two of the Research Directors @siriusdecisions behind the new framework to answer questions around its’ purpose and implications including:

Listen in to hear the discussion and their answers!