It’s Time for Sales to Stop Cussing the Mule and Start Loading the Wagon! 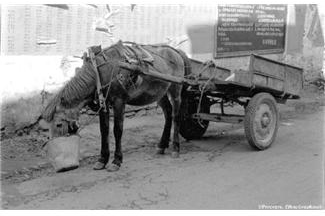 This is one our most popular blog entries of all time.  Of the 732 posts and 91,322 page views this seems to hit a nerve.

It’s time we stop cussing someone else and start tending to the work at hand to increase sales.    It’s time Sales started loading the wagon and stop cussing the mule

We’ve heard comments from salespeople such as, "The CRM system is time consuming, slow, and mainly benefits management, not me.” "Marketing doesn’t give us any leads." "Marketing isn’t giving us qualified sales leads." "That trade show sure was slow." "We’re not getting leads on the stuff I have a quota for."  From Marketing we hear, “Sales lead follow-up is non-existent” and “Sales doesn’t use the CRM System.”

“It’s time for salespeople to stop cussing those who create wealth opportunities for them, and start cooperating by following-up sales leads. The single item that most immediately influences sales results is the follow-up of sales leads.  Solve that issue and sales will increase in 90-180 days by 10-20%.”

The single item that immediately influences sales results is the follow-up of sales leads.  Solve that issue and sales will increase in 90-120 days by 10-20%.

I’m not saying that these statements, by either side, aren’t true.  But good managers should be open to hearing the truth and doing something about the criticisms.  Let’s take the issue of sales lead follow-up.

If salespeople aren’t following up leads, marketers have four choices:

1. Meet with the sales manager, share the reports showing lack of follow-up, and ask for action.   Don’t do it in meetings.  Don’t make the sales manager out to be stupid in public; do it subtly in private.

2.  Spotlight the reps who have the best reported follow-up. There is a correlation between reps who follow up and reps who make quota. In sales meetings, keep asking for follow-up from the salespeople.  Never point to the laggards; always praise the heroes. Show that those who follow up sales leads make quota. Let sales management work with the laggards.

3. Redirect the lead to another rep who cares. Of course this is easier to do with an independent rep organization; and it is a common practice.

4. Marketing, with or without marketing automation, can create a follow-up program of its own:

B.  Consider whether you should send Sales only qualified leads that have asked to speak to a salesperson?  These are called sales-ready leads.

C. If you are short-handed and can’t hire lead qualifiers, go to an outside service.

The actions which seem to get the most immediate sales improvements are the last two: redirect the lead to someone who cares, and take over the follow-up until the prospect is sales ready.

Last year a client’s salespeople said they had not gotten a dozen leads in a year.  Sure enough they were exaggerating.  They had gotten about 15 each in the previous year.  We jump-started lead generation and they started getting 60 per month, per rep. They were so swamped that follow-up dropped to 10% and the cussing started on both sides.  True, we gave them more than they could consume and eventually we slowed it down a bit (and hired more reps).

We even started using the marketing automation system that had been put in place four years before, but never used to its full potential.  We turned on the follow-up system.

We also started directing leads to other salespeople when leads were not followed-up in 48 hours; suddenly there was a change of heart.  They stopped cussing the mule and followed up the leads they were given.  I don’t mean to imply that Marketing is a mule, but you have to admit they are most often the unsung creators of wealth in an organization.

This blog is supported by the generous contributions of Clickpoint Software and VanillaSoft.