Dodgeball: The Future of US Business Leaders' Success Depends On It! 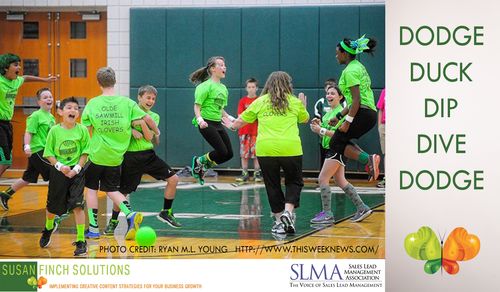 I’m not sure the year it happened, but at some point we decided it’s bad to teach our children that people win and people lose; somehow competing and striving to be better, to improve, isn’t ok now because it might hurt someone’s feelings.

Let’s bring it down to this simple event that seems to have changed everything. We stopped allowing

our kids to play dodgeball in school. Did you read that? This simple change in child-rearing opened the door to the situation we have now. We were too worried about children’s feelings getting hurt, lawsuits, and parents complaining to administrators about kids gloating when they did better than the other kid or team. This isn’t football laced with concussion risks, this isn’t permitting them to swing from monkey bars over concrete, but DODGEBALL. A simple game with fewer rules than most, easy to teach and easy to learn from. Throw the ball at the other team and take them out! Just like tag only no hand-to-body contact. Ok, you can still take it in the head, but you learn how to move out of the way much faster. No one is dogpiling on you. It’s a ball; dodge, duck, catch, and throw with ferocity. Or to quote the movie, “Dodge, duck, dip, dive, dodge.”

Do you remember dodgeball in school? I do. At the time, the only real recreational team sports were Little League and Pop Warner football. Soccer was just starting to get going in the U.S. Third through sixth grade was tough for me with friends. I was overly assertive, teacher’s pet, smart, loud, and a bit biting with my retorts as a defense mechanism. I was overweight in 6th grade. I had no endurance, I was not coordinated, I had crooked teeth, and didn’t have the best personal style. I was always picked last for a while. But, some team ended up with me every time because I wouldn’t go away. I learned from the other players. I was still overweight, which impeded my speed. I was still uncoordinated, but I had a strong desire to win and not be picked last. By sticking with it, I began to develop my skill of dead-on aim. I became a force in dodgeball. I was still slow, but if I had the ball, I nailed the other team every time and took them DOWN. It was awesome. I had no fear of striking or being struck because I had training from older brothers about being pelted. We were pelted, we lost, and we laughed. We fell over crying from pain and got up again, usually laughing because the injury was cool – it became a story to tell later. The victors and teams varied. Sometimes I was on the winning team and we celebrated. When we lost we vowed to get them next time.

Let’s recap: I was picked last because I stunk. But I asked those who were better to give me tips. We became friends; they brought me along on the team selection as a condition of their being on a team. This is when I started to make friends who appreciated my skills, called me out on my failings, and celebrated with me when we did better or won. That’s relationship building – a valuable skill to carry you through life. What happened to striving to be better, pushing ourselves to not be the one who sucked – wanting to achieve more to surpass the competition?

We are causing the next generation to lose that critical drive for success with our nannying, babysitting and spoonfeeding. Those coddling, touchy-feely parents think they are protecting their darlings from getting their little feelings hurt. I for one would never hire someone not used to losing or learning from to do better by losing. I won’t hire the tattlers, whiners and those who blame others for their lack of skill, drive and ability. Mama can’t always be there to wipe their noses and butts. Mama can’t be there to make sure everyone is nice to the baby and won’t hurt their wittle feelings, self-esteem and TELL THEM THE AWFUL TRUTH – they’re not good at it - YET. And, Mama won’t always be there to cheer them on when they push themselves, when they achieve, when they win. No celebration dances for these kids. These are also now banned in schools and team sports. They call that, “excessive celebration.”

Is that the kind of spouse, employee, friend you want to raise and support? A friend told me her child was restricted from soccer at school because he gloated when they won, “Yay! We won!” Why is that a bad thing? Why are we teaching our kids it’s wrong to be proud of their achievements and celebrate just because somebody else loses? That’s a game, that’s a sport, that’s business, that’s life. Somebody wins, somebody loses.

The helicopter, over-indulgent parents have raised a coddled, whiny, anxiety-ridden generation. This is who we will count on to protect us from our enemies, to build our economy through aggressive strategies and strong relationships around the globe with people who don’t always like them or us. What kind of leaders are they going to be if they can’t learn from losing, to rise above and come back strong?

Our parents didn’t raise useless adults sheltered from losing. These spoonfed babies will be running our country – sort of – someday. I’m dreading that time. But then I think about what a very successful client told me over dinner one night. We were all talking about how it’s changed for our kids. We have children the same ages, 11 and 14. He said, “Let those adults be weak and whiny. That paves the way for OUR kids to mow down the competition and rise above successfully. They will kick ass!” I have to agree. My kids beamed at this observation and they look forward to rising to the top due to their ability to learn from mistakes, and their desire and ability to better themselves after sucking at some of the things they attempt. They know they will be successful because we’ve raised them to be self-reliant, full of integrity and to not blame others for their shortcomings. We never let our kids win at ANYTHING – even as toddlers. We jeered them, taught them to laugh at themselves and to learn better strategies. We never let them cheat. They learned how to win and lose with grace. We all want to win in this house, but we don’t let losing keep us from playing another round. Who knows? The next time they may win. Currently, they trounce me in chess, checkers and other games. But Cribbage is still MINE!

*Please note, I did not poll all states across the United States. This is in reference to the US only. Other countries still embrace this awesome sport. Adults in Portland can join a recreational league too. I'm specifically referring to elementary schools in Oregon, Washington and other states.