Home The SLMA Join the SLMA 20 Women to Watch SLMA Radio Sponsors 40 Most Inspiring Privacy
Cartoon for the Weekend from Cartoonist Stu Heinecke - Lead Management The Movie
Withholding information doesn't empower you, it paralyzes you and your company.

Of the enduing skits and comedy routines by Abbott and Costello Who's on First continues to amuse. And yet in many ways the misunderstanding, confusion and frustration is not unlike sales and marketing's discussions about sales lead follow-up or lack of it and the results which plague the bottom line of most companies.  For instance: 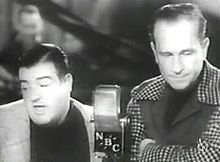 COSTELLO:  I’d like to talk about sales lead follow-up by salespeople.

COSTELLO:  But I understand that 45% of all the leads are buyers.

COSTELLO:  So what happens to the other 35% who want to buy?

COSTELLO:  So my salespeople have to make quota by only talking to 10% of the sales leads, which is 5% of the buyers they are given. That means they work harder than they have to.

ABBOTT:  That’s right.  If they followed-up 100% of all sales leads they’d figure out which 45% are going to buy, and they’d sell more because they’d talk to 90% more buyers.

COSTELLO:  Why does my company only want the salespeople to follow-up 10% of the leads?

ABBOTT:  They don’t.  They want your salespeople to follow-up 100% of the leads.

COSTELLO:  So why don’t the salespeople do as they’re told?

COSTELLO:  It’s free choice to not do what the company pays you to do?

COSTELLO:  Let me get this straight - - of all the leads the company creates, 45% will turn into a sale for someone.

COSTELLO:  But salespeople only follow-up 10%.

COSTELLO:  But my competitors are following-up with and calling on the sales leads my salespeople have chosen not to, because of free choice.

ABBOTT: Now you’ve got it.

COSTELLO:  Got what? The only thing I’ve got is a bunch of salespeople who don’t do what they’re told, sales results that are down because sales lead follow-up is off by 90%, and 90% of my marketing budget is wasted.

If you'd like to see the original Who's on First, here it is:

*Reference Wikipedia:  William “Bud” Abbott and Lou Costello were an American comedy duo whose work in vaudeville and on stage, radio, film and television made them the most popular comedy team during the 1940s and early 1950s.  Their patter routine “Who’s on First?” is one of the best-known comedy routines of all time and set the framework for many of their best-known comedy bits.

Posted at 01:43 AM in Humor, Sales Management, Stories | Permalink | 0 comments