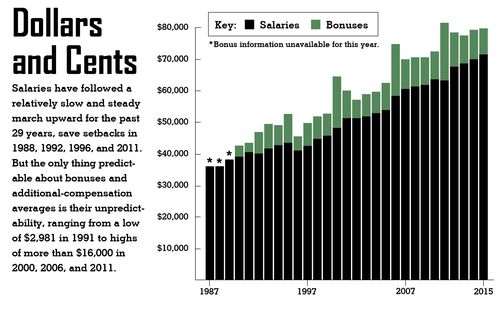 A press release issued by the Exhibitor Magazine as a result of their 29th Annual Salary Survey brought some bad news overall for exhibiting professionals.  Let me preface my remarks with the...

thought that it appears the people who bring in the most qualified leads in a company (revenue) via face to face meetings are losing ground on compensation. Go figure.  Either they aren’t good at showing their worth or senior management is doing a poor job of attributing an ROI for shows and therefore taking it out on the people creating wealth for them.  The study will be published in Exhibitor Magazine’s July 2015 issue

“While average base salaries increased by 3.4 percent, that increase was offset by a 21-percent drop in extra compensation (which includes bonuses, overtime pay, profit sharing, etc.). All told, exhibit marketers' total compensation only increased by one-tenth of one percent between 2014 and 2015.”

Event and exhibitor professionals with at least one professional industry certification have an annual salary that is 15% higher plus 24% more in extra compensation.

The monetary value of certification is estimated at $12,669 in earnings per year.   WOW, that is some figure.  In ten years that’s $126,690 big ones; but only 12% of the survey respondents have any form of certification.

Disclaimer:  Jim Obermayer with co-presenter Matt Hill has been a speaker at the annual Exhibitor Conference for many years speaking on the subject of how to create more qualified leads.

[i] Projected using a simple compounding calculator at 5% interest per year over 25 years.