Home The SLMA Join the SLMA 20 Women to Watch SLMA Radio Sponsors 40 Most Inspiring Privacy
Are your salespeople spending unproductive time generating their own leads?
Buy Online! Who, Me?

Life is simpler when you plough around the stump! 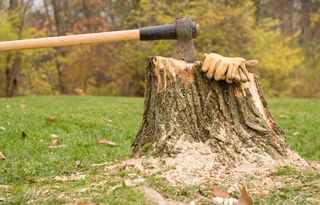 The problem is the stump is still there.   Maybe you can avoid it for a while, but sooner or later you have to figure out how to take the stump out.  The biggest stump most marketing managers have is the lack of follow-up of the sales inquiries and leads by the salespeople.  In most organizations it is a pretty big obstacle.  Let me tell you a story.

It starts with a sales manager who isn’t a team player, except within his own team and a marketing manager who isn’t strong enough to do what’s right in the face of  institutional laziness or fear of upsetting the salespeople.

The company had a CRM system and everyone was in general agreement that it was a failure.  No one really knew why.  The salespeople disliked it and didn’t use it.  Sales Management agreed with the salespeople and the manager was still in love with his spreadsheets.  Forecasts were late and inaccurate.  Marketing ROI was non-existent.  The $100K spent on the CRM system was considered a waste.

When sales fell and kept falling, in spite of the sales manager’s constant protests that improvements were just around the next quarter, management decided the chief sales officer had to go.

The new coach for the 50 person sales force came with a rash of new ideas, new initiatives and the inevitable changes in compensation, quotas, training and accountability.  In addition, the CSO decided to restart the CRM initiative.  He didn’t keep the old system, there was too much prejudice against it (although it was unfounded).    He asked marketing to produce more inquiries and especially more qualified leads.  He promised to follow-up every inquiry (he knew this was the fastest way to increase sales).

He chose a cloud based system, insisted on 100% follow-up and took the heat from the salespeople.  He had the new system setup along predictable lines of the sales process, made it easy for the salespeople, enforced 100% compliance and threatened to fire anyone who didn’t comply.    Spreadsheets disappeared as a weekly reporting tool (much to the joy of the salespeople).

As accountability took hold for leads, it spread to every aspect of the sales process.  Within three months there was a glimmer of hope as sales steadied and the free fall stopped.   Within six months there were successes from the most compliant salespeople which drew the attention of the stubborn slow to comply contingent.  Finally someone was no longer plowing around the stump.

As a result of the ROI reports from the CRM system, marketing management stopped chasing lead generation sources based on intuition and bought more of what worked and less of what didn’t.

As they delivered better quality leads, sales kept bumping up and the quantity of inquiries and qualified leads started to jump.  It was time for a marketing automation system plus, a few other tools to refine the process (Active Conversion comes to mind).   I won’t bore you with the rest of the story.

I am not saying they lived happily ever after because salespeople live month to month and quarter to quarter.  The sales and marketing managers know that if they keep doing what works and avoid what doesn’t work then next quarter will be better for them than for their competitors.

The company president is satisfied that someone finally took out the stump, he just didn’t realize that plowing around it all of those years was costing him an immense amount of lost opportunity.

What stumps have you been avoiding?